Our healthcare system is near breaking point. It needs healing. We envision health care professionals finding resilience in training compassion, mindfulness, and reducing burnout, depression, anger, and frustration. This resilience and new life will automatically be transmitted to patients. By 2030 we aim to transform medical education to incorporate curricula of self-compassion, compassion for others, mindfulness, and resilience as essential as anatomy, physiology, and pharmacology. 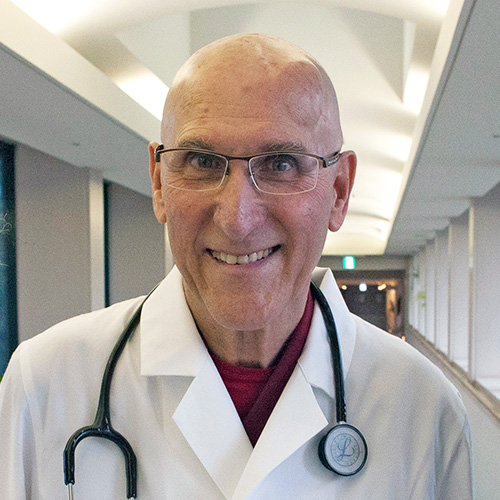 For over 30 years, he has been providing free medical care to the poor up to the highest lamas, including HH Dalai Lama. Barry has completed many meditation retreats including a three-year retreat. His brain was studied at Princeton Univ. and the Univ. of Wisconsin, Madison, as a long-term meditator. He was ordained as a Buddhist monk synthesizing monk and doctor work through harmonizing mind and body, lecturing around the world in Japan, Hong Kong, Russia, Mongolia, India, Korea, Europe, and North America.

For HVI, Barry works in juvenile prisons in Japan and is developing well-being curriculum. He teaches compassion to doctors at St. Luke's hospital in Tokyo, and other hospitals and medical schools in Japan, e.g. Kyoto University, and leads meditation retreats at Mt. Fuji. He has been training Google Japan employees in mindfulness, resilience, and compassion. He has delivered 2 TEDx talks.

For AIMI, in June 2015, he presented a medical grand rounds lecture on compassion at Stanford Medical School, and Stanford CCARE - and in July lectured at Surgical Grand Rounds on the science behind meditation to the Ventura County Medicine Centre, as well as lectured at the Univ. of Washington. In Spring 2016, he lectured at Oxford and Cambridge Universities, and U.K. medical schools.

Barry was the keynote speaker for the White Coat Ceremony for new first year medical students at the University of Louisville School of Medicine, both in 2016 and again in 2018. In Fall 2016, he presented the plenary lecture to 800 Family Doctors at the Family Medicine Education Consortium in Pittsburgh, and in 2018 started training 18,000 nurses at the University of Pittsburgh Medical Center in Compassion, Mindfulness, and Resilience.

In 2018, he taught CME courses for UPMC doctors, and presented a Medical Grand Rounds at the University of Pittsburgh School of Medicine. For the last 5 years at Unilever Japan, he has held symposia on ethical leadership for Japanese HR leaders as well as similar programs at Google Japan, Mitsubishi Jisho, and others. In 2019, he presented Altruistic Artificial Intelligence at Deep Mind Google, U.K.

Publications:
No Fear No Death: The Transformative Power of Compassion, and Nāgārjuna’s Wisdom: A Practitioner’s Guide to the Middle Way. Available in Japanese are Tibetan Buddhist Prescription for Happiness, and Mind and Matter: Dialogue between Two Nobel Laureates.

Barry has written many chapters for books and done many interviews for radio and TV, including documentaries on PBS New Medicine 2005; PBS Ethics and Religion 2015; and PBS Newshour 2015, as well as PBS Newshour Under-told stories 2020 .

My Near-Death Experience Inspired Me (Article on how a near-death experience inspired Dr. Kerzin to live a life of compassion).